Over the years, I've written a lot of poems, starting, as many of us do, in high school, and mostly for my own pleasure.  While I have published a handful of poems too, this one took on a curious life of its own, my one-hit wonder.

I wrote this in 1993, at the urging of my friend Terri Ford, and sent it to ZYZZYVA on a whim.  From there it was picked up by Harper's, then chosen for Best American Poetry 1995, and then over the next several years, was anthologized over a dozen times, from a fine press edition of poems about Sunday to college English textbooks.  I wrote the poem in an afternoon, and except for one small change, it appears as written.  It's one of those gifts the writing life sometimes gives you, where you're simply the radar dish lucky enough to receive the message. 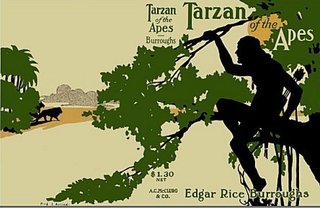 Sunday, Tarzan in His Hammock

When the king of the jungle first wakes up, he thinks

it's going to be a great day, as laden with possibility

as the banana tree with banana hands, but by ten

he's still in the hammock, arms and legs dull as

termite mounds.  He stares at the thatched roof and realizes

that his early good mood was a leftover from Saturday,

when he got so much done: a great day, he saved

the tiger cub trapped in the banyan, herded the hippos

away from the tourists and their cameras and guns,

restrung and greased the N-NW vines, and all by noon.

All day he went about his duties, not so much kingly duties

as custodial, and last night, he and Cheetah went for a walk

under the ostrich-egg moon. This morning nothing stirs him.

The world is a stagnant river, a scummy creek's dammed pool.

Cheetah's gone chattering off, Jane is in town,

and the rest of the animals are busy with one another -

he does not want to move.  Does the gazelle ever feel this

lassitude, does it ever want to lie down and just stare,

no longer caring for its own safety, tired of the vigilance?

Does the lion, fat in the grass, ever think, fuck it,

and watch the village girls bathe, splashing in the sun,

their breasts and thighs perfect.  He wishes someone

would bring him a gourd of palm-wine, a platter

or maybe a bowl of roasted yams slathered in goat butter,

maybe Jane will bring him a book.  Nothing will be delivered.

He hears far off in the dense canopy a zebra's cry for help,

those damned jackals again, but, no, he will not move.

the world.  He can live without the call of the wild.